The nomination period for 2019 giveaway has ended. Thank you to everyone who took the time to nominate a veteran. 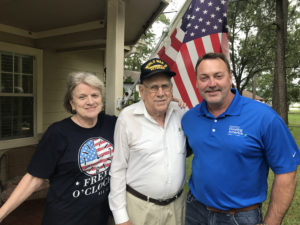 The winner of the 2019 Flaherty's Cares Floor Giveaway is Mr. George Ellis. A World War II veteran, Mr. Ellis was nominated by his daughter, Linda Clark who noted in her nomination letter that her father is, “One of the final few of the greatest generation, this 94 year old, had a deferment to stay and help with his family's farm – but chose to enlist to save the county he loved and respected.”

On October 11, 2019, Patrick and his team, surprised Mr. Ellis at his residence in Conroe, TX with the news that he had won the floor giveaway. 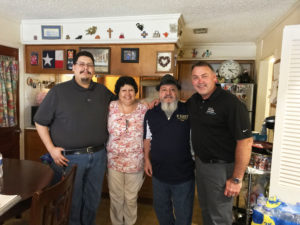 The winner of the 2018 Flaherty's Cares Floor Giveaway is Mr. Ruben Canales. He is a Vietnam War veteran. He was nominated by his son, Ruperto Canales.

Watch the video about the winner.